Firefest are extremely pleased to announce FM as the headline act for the forthcoming FIREFEST 6 show at Nottingham Rock City on Saturday October 24th 2009.  As you know, the last time the boys played Firefest was the reunion show back at FF4 in 2007 and a suitably great time was had by all.  The Live DVD "Back in the Saddle" was recorded (and incidentally is still available in the shop) on that now legendary evening.  The reunion of 5 great friends who just happened to be in a band together couldn’t have gone better.

Moving on to 2009 and the forthcoming Firefest show, FM will once again reclaim their rightful spot as headliners and darlings of the melodic hard rock genre when they hit the stage at Firefest 6.  FM’s performance will be the band's ONLY UK HEADLINE performance of 2009, and as usual the boys are trying to make it a special event.  Firstly the BRAND NEW FM album will be released at Firefest and initially it will be the ONLY place that it can be purchased... that’s right, the merchandise booth at Firefest... the first album of original music released by the boys since "Dead Man’s Shoes" in 1995... (let’s discount  "Paraphenalia"  because it was a Japanese only release).

Also, in another little twist of fate, on the Firefest 6 bill is ROMEO’S DAUGHTER sporting the full original line-up that toured with the FM boys back in 1989.  And the little twist of fate... it will be 20 years to the day that FM and the Romeo’s first shared the stage and bassist Merv Goldsworthy first laid eyes on the delectable Leigh Matty, whom he somehow later persuaded to become Mrs Goldsworthy!!

Just for the record, we did consider changing this to FM–FEST as the Firefest line-up also features Drive She Said and White Sister, another two bands that supported FM on those memorable tours of the UK in the late eighties and early nineties.  So in a nutshell, you can actually re-live every one of those tours once again by attending FIREFEST 6 .

Full details of Firefest 6 will be available on www.thefirefest.com.

Firefest and FMOfficial.com would like to offer the band's loyal and patient supporters an opportunity to grab what will be one of the hottest tickets in the live calendar for 2009 at a specially reduced rate available only to fmofficial.com subscribers.  The FM Official discount will be issued to all subscribers to FM Official via the mailing list newsletter on Tuesday 24th February.   Please also remember Firefest 4 which was headlined by FM in 2007 sold out well in advance and this year will be no different with a reduced capacity of only 1250 tickets being sold for the main day.  The reduced price offer is good until March 31st when the main day ticket price reverts to the standard price.

So there you have it, the ONLY UK headline show for 2009, the brand new album being released on the day of Firefest and a supporting cast including 3 bands that previously toured with the boys back in the day... Change the date... Christmas for FM fans is now October 24th.

Tickets can only be purchased directly from FIREFEST using Paypal.  Paypal payment address is : fireworks.mag@ntlworld.com

Please allow 21 days for delivery.  A list of further retail outlets will be announced at a later date.

PLEASE NOTE:  To obtain your FM Official subscribers' discount, you must use the subscriber codes which will be issued in the FM Official newsletter tomorrow.   Thank you.

We have the greatest pleasure in introducing Jim Kirkpatrick to you, the new FM guitarist.

Jim lives near Steve in Cheshire and they’ve worked together on numerous occasions.  On hearing of Andy’s departure Jim called Steve to ask if he could come down and try out for the gig, a rehearsal was booked and Jim blew us away with his guitar playing.  We went through oldies and threw him in the deep end with some of the new tracks we’d written which he’d obviously never heard before.  Although apparently being seriously nervous, “absolutely sh***ing myself” were Jim's actual words, we were totally impressed with his tasteful, melodic guitar playing, he stamped his mark on the old and new songs alike.  It was clearly apparent there was no need to look any further, Jim fitted the bill perfectly and he was promptly offered the job before the gear was even packed away.

After the overwhelming response to the Winstanley College show, promoters HMP are delighted to announce FM's only other confirmed show for 2009 plus details of this year's Castle Park Rock Festival.

The outdoor festival on Saturday 30th May is to be held in the stunning grounds of Caldicot Castle, South Wales (20 minutes from Bristol/Cardiff).  Joining FM on the bill will be Terrorvision, Gun and It Bites plus more supporting acts to be announced shortly.

Tickets are attractively priced and on sale now at just £27 with a free 'EP' download available, courtesy of the bands & Townsend Records if you book on-line (please follow the link below).  For telephone sales call 01254 885995

The promoter has also secured limited on-site camping, available for Friday and Saturday night at only £6 per tent and £10 per caravan per night.  For camping call 01291 627122.

The festival has gained a healthy reputation over the years as a friendly, relaxed event with no age restrictions in place.  We also believe that with gates opening at midday & bands playing until 11:00pm this offers a great day's entertainment and of course another chance to see to see the mighty FM live!

Further details of the festival can be found at www.castleparkrock.co.uk

Due to circumstances beyond our control regarding shipping of our new album we are sorry to advise that the release date for SYNCHRONIZED ha... 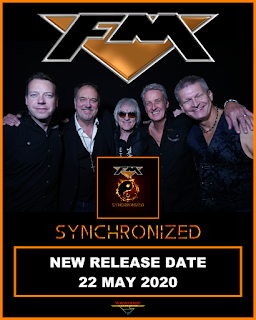