Merry Christmas to you all!

Christmas is here once again, a time to give thanks for our blessings, a time to reflect and to look forward...

This has been a very special year in FM history.  Back in 1986, as fresh-faced whippersnappers (!) - in venues such as Wishaw Heathery Hall, Birkenhead Stairways, Central Park in Burton on Trent and Coventry General Wolfe - did any of us think we would all come together again 25 years later to celebrate Indiscreet 25 Live?  A massive thank you to everyone who joined us at Glasgow Cathouse, Manchester Academy and London Shepherd's Bush Empire to turn back the clock and party like it's 1986!  We were touched also by all the heartfelt comments you posted in our Indiscreet 25 Live guestbook.  To those brave souls who joined in the fun and sent in their photos from the 1980s for our Class of '86 gallery - we salute you!

We kicked off 2012 of course with a headline spot at the Great British Rock & Blues Festival in Skegness, what a fantastic time we had and it was great to see so many of you there that weekend.  The second half of our year was dominated by shows with our good friends Thin Lizzy, during the summer in Carlisle and Belfast and then in November / December on their UK tour which saw us joined by those lovely chaps from The Treatment.  We had a blast and it was fabulous to play towns which were new to us and to revisit places such as Norwich and Middlesbrough.

We also put any spare time to very good use this year, preparing for the release of our new album ROCKVILLE next March.  ONLY FOOLIN' EP gave you a taster of what's to come.  Your encouragement and your support via our PledgeMusic campaign has been phenomenal and has spurred us on.  The new songs for the 2-CD Edition of ROCKVILLE are all recorded and we can't wait to start filming the promo videos in January.  If you Pledged to join one of our video shoots, see you in a couple of weeks!  We're also looking forward to seeing you on our headline tour in March.  Special Guests will be announced very soon, we're so excited and we're sure you will be too!

We thank each and every one of you for being a part of our year, your continued love and support never ceases to amaze us and we would like to take this opportunity to wish you and your loved ones a peaceful, healthy and very happy Christmas.

We'll be filming promo videos for our new album ROCKVILLE in January and we're excited to announce the opportunity for you to join us on the video shoots.

Join us as we film the promo videos for our new album ROCKVILLE.  Arrive at 1pm and spend the afternoon hanging out with us to see how it all comes together.  Meet and Greet plus a photo shoot and get the chance to appear in the video.  You will also receive an exclusive limited edtion T-shirt and laminate as souvenirs of the occasion.

Head over to our PledgeMusic page to join us on our video shoots in Derby or Wigan in January. 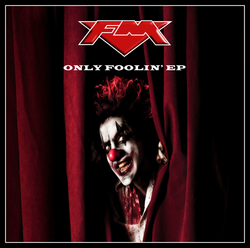 We're having a super-duper time on the road with the chaps from Thin Lizzy and The Treatment at the moment and we thought it would be rather lovely to have one of our competitions as a little celebration.

Head over to our Competitions page for a chance to win one of three signed copies of our new CD - ONLY FOOLIN' EP.

Get your entry in to us before midnight on 18th December.  We'll put all the correct entries into Merv's hat (well, he's not using it anymore...) and three CDs will be on their way to their new homes before you can say "It's nearly Christmas!"

Pete's tour blog is up and running while FM are on the road with Thin Lizzy and The Treatment.  Read all about it on our Diary page.

Check back regularly for updates!