New Pledge released today:  Ticketholders for any of the dates on our March tour may now pledge for a VIP package which includes attendance at the soundcheck, meet with the band, after show access and a souvenir V.I.P. laminate.

This V.I.P. package is available now from the FM PledgeMusic page where you may also pre-order new album ROCKVILLE, the Deluxe Edition ROCKVILLE II and a host of other exclusives.

A limited stock of popular compilation CD VINTAGE & RARE is now available from the FM webshop.

Described by Dave Ling of Classic Rock as "the perfect beginner's guide to all things FM" this 34-track American 'Best Of' includes all the FM anthems and rarer classics. 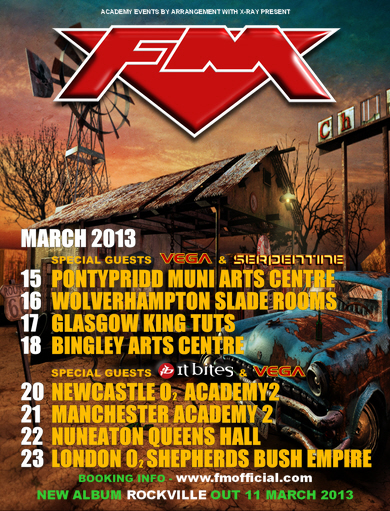 "We are absolutely delighted to confirm IT BITES, VEGA and SERPENTINE will be joining us on the road in March when we tour for our new album ROCKVILLE" says Merv.  "Special Guests for our first four shows 15th-18th March are Vega and Serpentine, and for the shows 20th-23rd March our Special Guests will be It Bites and Vega."

"It's been quite a few years since we last shared a stage with It Bites, Reading Festival in 1986 to be exact" adds Merv. "We're looking forward to catching up with them again!  They're making fantastic albums and it's going to be a real pleasure to have them on the road with us."   It Bites have long been firm favourites for lovers of finely-crafted music.  Check out the EPK for their 2012 album MAP OF THE PAST.

Vega are set to release new album WHAT THE HELL later this month.  "This is a dream start to 2013 for Vega.  FM are a band we have always had huge respect for and Steve Overland has one of the best voices in rock today" says Nick Workman, Vega's vocalist. "Vega wil make sure you are fully lubricated and warmed up before FM hit the stage!  Roll on March 2013..."  Check out Vega on their Facebook page.

Serpentine are currently hard at work preparing their follow-up to 2011's LIVING AND DYING IN HIGH DEFINITION.  "It's an honour and a privilege to tour with FM, a band we've listened to as we've grown up and look up to as legends in the melodic rock genre.  We'll be looking forward to bringing our best performances to some cities we've never played before as well as some we'll be lucky enough to revisit;  this is an opportunity we'll definitely be making the most of!"  Find out more on the Serpentine website.