We are very pleased to announce we will be playing the Ramblin' Man Fair Main Stage on Saturday 25 July 2015 alongside Scorpions, Dream Theater, Saxon, Blue Oyster Cult and No Hot Ashes.

We believe there’s a Ramblin’ Man - or Ramblin’ Woman - in all of us who wants to wander and listen to great music, drink fine beer, eat great food and have the best of times. Live life to the full and take it as it comes as you join the Ramblin’ Family from 2015

Ramblin’ Man Fair is delighted to announce further acts to join the already impressive bill. The Rock Collective and TeamRock presents… event will bring the best of Classic Rock, Progressive Rock, Country and Blues to Mote Park in Maidstone, Kent over the weekend of 25th and 26th July 2015.

Dream Theater (UK Exclusive Show) are masters of progressive metal and one of the most acclaimed and successful bands of modern times, with more than 12 million album sold in their career. Their appearance at Ramblin’ Man Fair is a UK exclusive.
Saxon are a truly legendary British heavy metal band – hailed by Metallica as one of their biggest influences. In the early 80s, Saxon made their name with era-defining albums such as Wheels Of Steel and Denim And Leather. Three decades on, they’re still delivering pure heavy metal thunder, with a new studio album expected soon.

“We are excited about playing our only festival show in the UK this year.  It will be the last show of the 35th anniversary tour so make sure you bring your denim and leather.” – Biff Byford, Saxon.

Blue Oyster Cult are among the most enigmatic and influential American rock bands of all time, their mythic status sealed by seminal albums such as Secret Treaties and Agents Of Fortune – the latter featuring the smash hit and classic rock anthem (Don’t Fear) The Reaper. The band’s current line-up is still led by two of the dominant figures in BOC’s history: frontman Eric Bloom and guitar hero Donald ‘Buck Dharma’ Roeser.

FM have been described by Classic Rock magazine as the best melodic rock band ever to come out of the UK. Now, more than 30 years after their classic debut album Indiscreet, the new FM album Heroes & Villains proves they’re still at the very top of their game.

No Hot Ashes are one of the bands that formed part of Belfast's epic 80's rock scene. The beginning of 2014 saw them supporting the likes of Foreigner, FM and UFO. They are now bringing their music to the main stage at Ramblin Man Fair to put on one hell of a show

More acts for all stages are set to be announced soon…

Ramblin’ Man Fair is set to become the must see event for discerning festival goers. A quality musical line up with a number of UK exclusive performances will be coupled with excellent amenities throughout, including gourmet food, a beer festival, spoken word stage, the best in music cinema, luxury camping and accommodation packages and more. The event will be a unique experience set to become a staple of the UK festival calendar.

The festival will take place in the beautiful Mote Park in Maidstone, Kent – the garden of England.
The park is one of the largest in South East England with more than 450 acres of mature parkland and a 30 acre lake. With multiple travel links via train (Ashford International, Maidstone East and Maidstone West in close proximity) and road (with three park and rides available around Maidstone). The festival site is also perfect for European festival goers with easy links to the London airports, the Chunnel and Ferries to and from mainland Europe.

Coach and Travel Information
Ramblin’ Man Fair has teamed up with Big Green Coach, the Events Travel Company, who are operating day return coach services on both Saturday 25th and Sunday 26th July from London Victoria Coach Station direct to the festival. A return coach fare is only £29 and you can choose to buy travel only or travel together with your festival ticket.

Accommodation
Ramblin’ Man Fair has also announced the first of its much anticipated accommodation packages - a variety of options for all needs and budgets including Glamping at the Ranch Packages, Hotel Packages and Off-Site Camping Packages (coming soon). All available through www.ramblinmanfair.com

Additionally those buying early tickets will have a once in a lifetime opportunity to take up the very special offer of being in the Founders Club. As well as including two years VIP tickets this unique offer gives the Founders access to their own special club area on site for life, exclusive merchandise and much much more.

All weekend tickets for Ramblin’ Man Fair include 6 months membership to TeamRock+. This provides online access via Teamrock.com to complete current issue magazine content for Classic Rock, Metal Hammer and Prog, and bonus content including archive articles going back 30 years.

The festival will be supporting local charities.

We are very pleased to announce Del Bromham (Stray) and Simon Rinaldo (Pearl Handled Revolver) as special guests for our show at Esquires in Bedford on Friday 13th March.  Local legends Del and Simon will be doing an acoustic set, please come early this will be one not to miss! 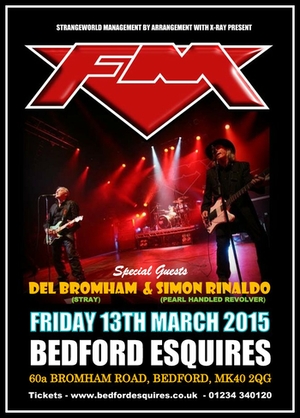 We are delighted to confirm Hand Of Dimes will be joining us once more as Special Guests for our show at Grimsby Yardbirds on Friday 3rd April 2015.

Tickets for this show are available from See Tickets. 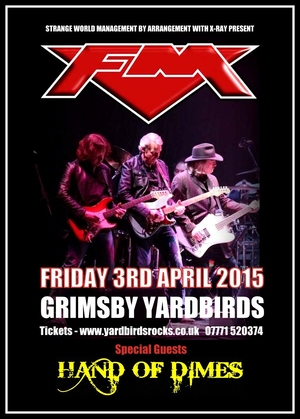 We are pleased to announce our special guests for the Civic Hall show in Nantwich on Sat 4th April are Lawless and Hex.

Tickets are available from www.nantwichjazz.com 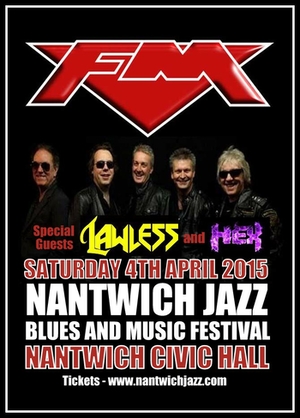 Official Indiscreet and Tough It Out clothing now available