Those wonderful people at Get Ready To Rock! in their wisdom have included FM in their list of nominees for their 'Ten for 10' promotion – 10 bands they feel deserve wider attention in 2010.   The 25 bands on the shortlist will be reduced to 10 by a combination of panel and public vote.   The lucky 10 artists will then receive extra support from Get Ready To Rock! throughout the year in the form of regular news updates, features, reviews and exposure via their radio channel.

Please show Get Ready To Rock! how much you love FM by clicking the button next to our band name on this GRTR page.

Voting closes Sunday 31st January. No subscription or registration required, just a few seconds of your time to click for FM.

Thanks everyone, much appreciated!

Wow! The response to the Meet and Greet has been overwhelming to say the least. We have had well over 200 requests to be there! As much as we would love to be able to accommodate all you lovely people it just isn't possible, we’d probably have to cancel the gig due to writers' cramp!   So what we’ve done is brought the start time forward by thirty minutes to 6.00pm giving us an extra half an hour of M&G time.

We didn't go all scientific and stuff choosing winners but we basically put all the names in a very large hat and drew out 60 people.  The lucky ones will be notified by email shortly.   All we ask from the recipients is that you arrive at The Roadhouse 5.45pm sharp with a copy of your confirmation email and please only bring two items to be signed at the M&G. By all means bring more stuff with you as the band will be around after the show to sign whatever you want.   Obviously bring your cameras for a picture with the guys.

We are delighted to announce that we have a special guest in the form of the hugely talented James Ralphs, son of the legendary Mott The Hoople/Bad Company guitarist/songwriter Mick Ralphs.  James will be playing an acoustic set of his songs along with band mate Mat Griffiths with whom he has been collaborating for the past few years.

James Ralphs is a songwriter currently living in Brighton who writes pop music, plays piano, guitar and sings. He listens to Pop, Reggae, Folk, Indie, Jazz, Blues, Dubstep, Hip-Hop and Rock. Within his own music some might say that he takes his influences from artists such as Alex Turner, Jamie T, Jack Penate, Nizlopi, Bob Marley, Jason Mraz, Laura Marling and Mystery Jets. We think James is destined for big things. He is already causing a stir within the music industry and has studio time coming up at the world famous Abbey Road Studios later this year. We love James, so will you.

The guitar giveaway will take place as soon as the boys have had a quick rub down and a beer after their live set. Your numbered admission ticket is what you need to keep safe and sound as the ticket stubs will be used for the draw. Match your ticket with the stub drawn by the band and Bingo! - you’re a winner!  You must be present at the time the draw is made to win the prizes.  Before the main prize we are also giving away the book that was used for jotting things down during the recording of METROPOLIS.  It also contains all the hand-written lyrics to the songs on the album.  As with the guitar, the boys will be more than happy to sign it if the lucky winner wants.

After that it will be at least an hour of mayhem on the decks with DJ Juppy spinning all his and your favourite rock tunes.  As The Superbowl coincides with the Launch Party, American Football fans will be delighted that we have managed to persuade the powers that be at The Roadhouse to keep the club open for this momentous sporting event.

So it’s looking very much like you’d all better remember to throw a sickie at work on the Monday as this will be a very late/drunken/riotous affair.

Not got a ticket yet? Don’t leave it too long and end up being disappointed!

You have been warned!!!

Have you got your tickets for the METROPOLIS Launch Party?

Your ticket enters you into a free prize draw for a signed Peavey guitar used by Steve and Jim on METROPOLIS - also full playback of our new album - aftershow party with DJ Juppy on the decks - plus a wealth of other goodies... 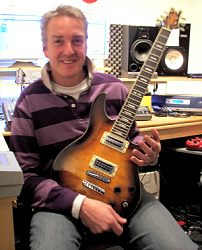 Here is the actual Peavey guitar used by Steve and Jim on METROPOLIS.  We will be giving it away to a lucky ticket-holder at the album launch party on February 7th at the Roadhouse in London.  By purchasing a ticket you are automatically entered into the prize draw.  More goodies to be announced soon...

Good luck and we look forward to seeing you there!