We'll be back at Ramblin' Man Fair in July!  FM played at the first Ramblin' Man back in 2014 and we are delighted to join the fantastic line-up in its fifth year. 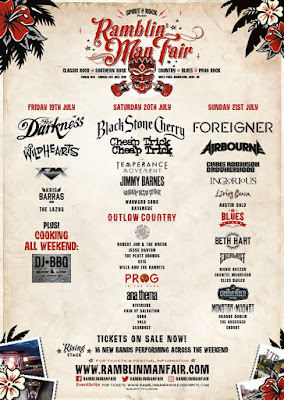 North of the border, Gun were TAKING ON THE WORLD. Down south, FM promised to TOUGH IT OUT. And, on the other side of the Pond, a determined Dan Reed delivered the grand SLAM of funk rock.

The year was 1989. The demolition of the Berlin Wall was about to usher in a new era of socio-political change. And three ambitious bands were set to challenge the old guard and breathe new life into radio-friendly rock – touring the world alongside some of the biggest acts on the planet.

Gun fired the first shots: Taking On The World hit stores in the summer of 1989 and five top 75 singles followed. Better Days and Shame On You both cracked the Top 40 and the band made their Top Of The Pops debut…before opening up for the Rolling Stones across Europe on the Steel Wheels/Urban Jungle tour.

FM and Dan Reed Network joined the party in October – the former releasing Tough It Out and the latter dropping Slam. FM had just come off the final leg of Bon Jovi’s record breaking Slippery When Wet tour when they holed up in London to record the follow-up to Indiscreet. The Desmond Child co-write Bad Luck led the way on what would become a melodic rock masterpiece.

Meanwhile, Reed and his Network dialled into the demand for something different – using celebrated producer Nile Rodgers to inject some serious funk into their soft rock mix. The addictive Slam spawned four singles and secured support slots with both Bon Jovi and the Stones.

That was then. This is now.

Fast forward three decades and three iconic bands will celebrate three fabled albums at 10 special shows across the UK in December. “This is sure to be an incredible run of dates,” said Gun’s Dante Gizzi. “Three great bands, three classic albums and 30 years of music - what more could you want,” added FM’s Steve Overland. “It’s going to be a full-on night of hard driving grooves and soaring melodies and a celebration of the past, present and future,” promised Reed.

Taking On The World, Tough It Out and Slam will be performed in their entirety as Christmas comes early for rock fans ready to revisit a golden era and celebrate a slew of fist-pumping anthems. “When the idea of Gun, FM and Dan Reed Network playing together was suggested, we just couldn’t say no,” added FM’s Merv Goldsworthy. “And since it turns out that we’re all celebrating 30 years of great albums, it really is a no-brainer to take it round the country.”

Reed can’t wait. “We’re just thrilled to be celebrating 30 years of Slam and sharing the stage with two awesome contemporaries,” he added. And for Gizzi the chance to belt out Gun’s debut album at Glasgow’s Barrowlands on the final date of the tour is a golden opportunity. “This has got to be up there with one of the most highly anticipated shows ever for us,” he said. “Performing a stone’s throw from where we were brought up – with two brilliant bands – is incredible. It doesn’t get much better for a band like Gun.”

Click here for general on-sale from 9am Wednesday 17 April 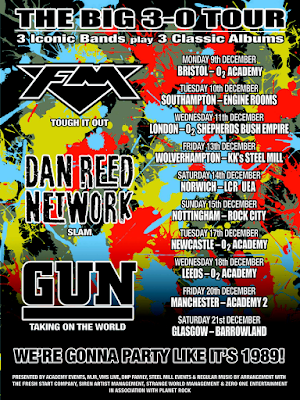 We're delighted to be invited as Special Guests for Skid Row on their "United World Rebellion" tour in Germany in November.

Tickets for these shows are on sale now at Eventim. 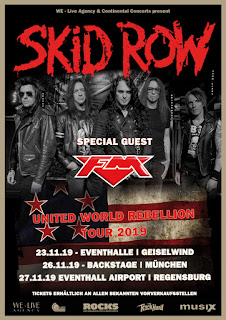 It's the last night of our co-headline 35th anniversary tour with The Quireboys and we're looking forward to playing at KK's Steel Mill in Wolverhampton tonight!

We're having a smashing time on tour with The Quireboys, Bad Touch and Vega. Tonight we're at Glasgow Garage and it's going to be a good 'un! 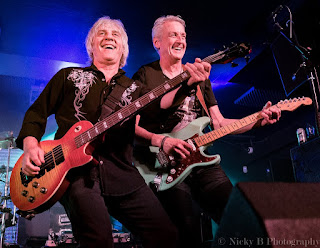 Tickets for this show are available from https://www.seetickets.com/tour/the-quireboys-fm-bad-touch-vega. 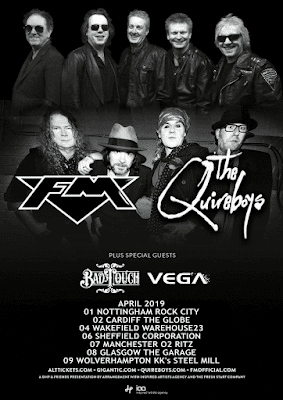 We're excited to be joining the line-up for Rock Fest Barcelona in July!

FM will be hitting the stage on Sunday 7 July - the full line-up of bands can be found at http://rockfestbarcelona.com/bandas. 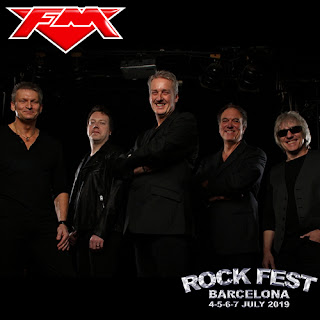 Stage times for Cardiff tonight and Wakefield on Thursday

Stage times for our show tonight at Cardiff The Globe and and Thursday's show at Wakefield Warehouse23...