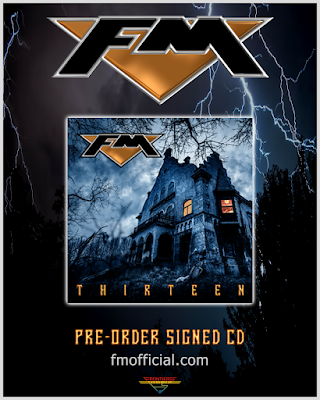 18 March 2022 will see the release of melodic rock stalwarts FM's thirteenth studio album, the appropriately titled "THIRTEEN". Produced by the band, "Thirteen" is yet another high-quality album that furthers the band's standing as one of the premiere melodic rock entities in the world. The first single and video from the album "Waiting On Love" is out today. See the video above and on YouTube at https://youtu.be/r7dLbO5RlfU.

Signed copies of the album can be preordered from the official band store.

The band's current - and longest-running - line-up, in place since 2008, has spent the last decade plus writing, recording and touring, and thus is an incredibly gelled and cohesive unit. The rhythm section of bassist Merv Goldsworthy and drummer Pete Jupp anchor FM with a rock-solid backbone, whilst guitarist Jim Kirkpatrick delivers delicious hooks and melodies with keyboardist Jem Davis adding lush layers to the band's dynamic sound. And what more could be said about Steve "The Voice" Overland, whose golden pipes have easily withstood the test of time and who still sings like an angel while adding delightful guitar parts to the proceedings. The five-piece once again bonds as the mighty unit FM on "Thirteen" and delivers beautiful melodic rock that their fans have  come to expect.

Check in Monday for preorder details...

Come back on Monday for preorder details...