FM return to the studio

After about 13 years - we’re not entirely sure to be truthful but who’s counting - we went back into a recording studio together to start our new album.  And what a studio, Metropolis in Chiswick, West London.  When you are talking about top recording facilities Metropolis is spoken about in the same breath as Abbey Road, enough said.

In the preceding weeks before we went in their client list included The Black Eyed Peas, Beyonce and some bloke called Michael Bolton.  We were met by the lovely Katy who is the studio manager who in turn introduced us to Matt Lawrence, engineer extraordinaire and just about the nicest guy you could ever wish to meet.  We were taken down to studio 1 and entered the control room, which incidentally is just the biggest control room, housing the biggest mixing desk any of us had ever seen.  Matt introduced us to Zav, another fine chap, who was assisting Matt on the session.  Zav took us through to the live area where our equipment would go, now this room is big enough for orchestral recording so the four of us were dwarfed, but the vibe was fantastic and we couldn’t wait to get going.  We were going to record two songs to start with "Days Gone By" and "Who’ll Stop the Rain".  Our gear was set, miked up and we were ready to go for some takes within an hour or so.

The tracks went down really smoothly and are sounding absolutely fantastic.  Steve did some guitar overdubs and then Jem was let loose on the studio grand piano.  Now this isn’t just any old piano, it’s been used by the late great Freddie Mercury on various Queen recordings and now it was Jem's turn to leave his mark.  So with the backing tracks done we moved over to a smaller, but equally well equipped, studio complex in FX Rentals Acton, again in West London, to continue with overdubbing and vocals.  Here engineering duties were handled by the very able James Ridley, another splendid fellow and fine young engineer.  So there we are folks, proof we have started the next FM studio album and it’s sounding the business.

For those of you who wish to see the Queen video that was filmed at Metropolis the song is "Headlong" and you can see it on YouTube.

See more photos from our Metropolis Studios sessions on our Diary page.

We are excited to announce dates for our first ever shows in Australia! In addition to the already announced MelodicRock Fest we will be vis... 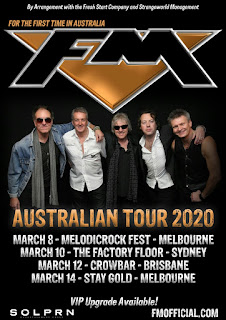