"LIVE IN EUROPE" DVD set for release in March 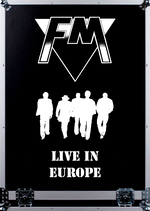 We're pleased to present our new DVD - LIVE IN EUROPE.  Featuring our exploits during the summer of 2011 when we played at major festivals such as Download and Graspop Metal Meeting, the DVD includes footage from our sets at Rock The Nation, our shows with Journey and Foreigner in Ireland and our triumphant return to Portugal.  With a running time of 107 minutes the DVD also features a bonus section of our January 2011 performance as Special Guests of Thin Lizzy at London's Hammersmith Apollo.

Those of you attending our INDISCREET 25 LIVE shows in Glasgow March 8th, Manchester March 9th and London March 10th will be able to get your hands on advance signed copies from the merchandising stand at the shows.  Don't worry if you are not able to come to any of the shows - advance signed copies of LIVE IN EUROPE will also be available from our webshop from March 12th for £7.99 with free UK P&P.

LIVE IN EUROPE will go on general release via Riff City Films on 26th March 2012 and will be available from that date from all the usual stockists such as Amazon and play.com.


View the trailer for LIVE IN EUROPE

The competition closing date is midnight, Tuesday 6th March 2012.  One entry per person only please.  We will pick our five favourite replies from all entries received and winners will be notified by email from fmofficial.com shortly after the closing date.  You have one week to enter the competition so don't delay!

Leading up to the release of our new album we are pleased to announce three more UK shows in April along with already announced Nantwich Jaz... 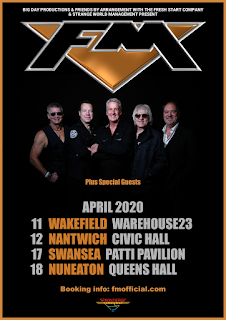